June 23, 2020 Items On The Ventura County Board of Supervisors Agenda for Harbor Department 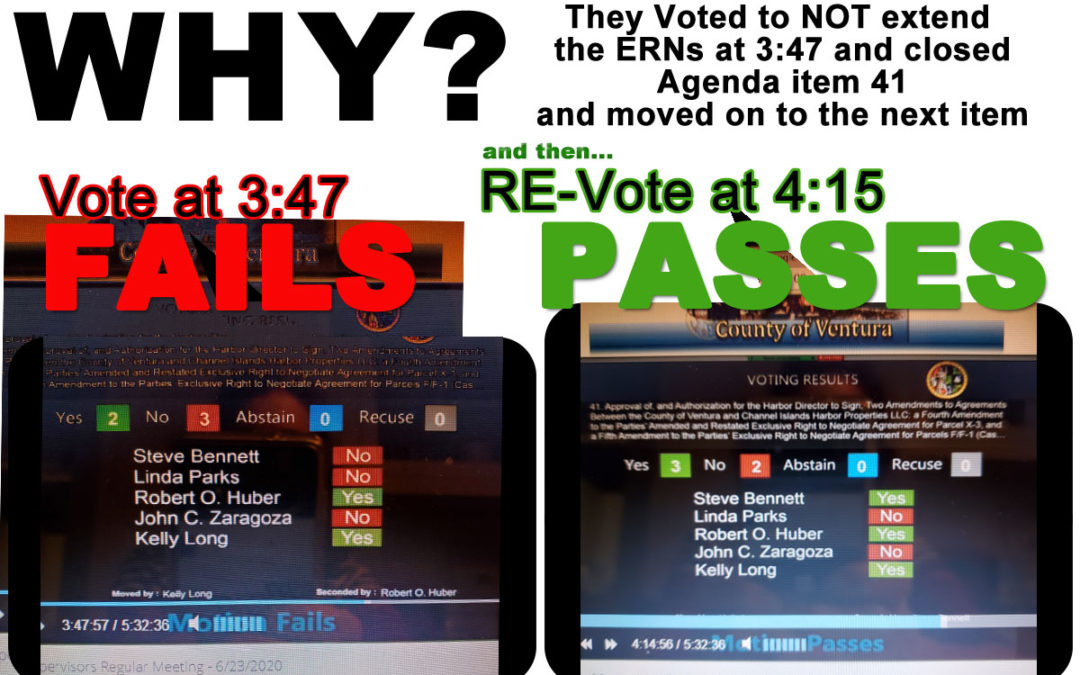 READ THE LATEST: Letter to DA re Brown Act Violation by County of Ventura

First vote NO=3 Yes=2  NO EXTENSIONS!

After the next item on the agenda was being addressed Steve Bennett made a motion to reconsider because he wanted to rescind his vote!

Because Steve Bennett asked to rescinded his vote in favor of the developer.

The board of Supervisors removed the item for 99,000 for visioning from the agenda.
The hearing regarding the Exclusive Right to Negotiate was moved to Time Certian at 11 am

The discussion following presentation by Harbor Director and public comments seemed to focus more on visioning that the ERNs themselves. Linda Parks had stated that she did not see a reason for extentions if all developers could participate in visioning.

The harbor director many times made statements that ALL developers could participate in Visioning and that these ERNs would not influence that.

Supervisor Linda Parks questioned if the ERNs would not give an advantage to the developers – and why if visioning was open to ALL developers this developer would need an extension – they could participate with all.

Bennett pulled support at that statement by legal…
VOTE:
Bennett: NO
PARKS NO
HUBER YES
ZARAGOSA NO
LONG YES

Then after the next agenda item was being discussed Mr Bennett made a request to “RECONSIDER” and he rescinded in the second vote:

https://www.ventura.org/board-of-supervisors/agendas-documents-and-broadcasts/
KEEP WRITING TO BOARD OF SUPERVISORS!

The Harbor Department has 2 Items on the agenda for June 23 2020 that we are opposed to!

UPDATE June 23, 2020
33 Public Comments received and this item was removed from the agenda

Subject: Board of Supervisors Meeting Agenda for June 23, 2020 – Consent Item #17: Approval of, and Authorization for the Harbor Director to Execute a Consultant Services Agreement for Visioning and Planning Services for Channel Islands Harbor with Sargent Town Planning in a Not to Exceed Amount of $99,000.

Subject: Ventura County Board Meeting of June 23, 2020 – Regular Agenda Item 41: Approval of, and Authorization for the Harbor Director to Sign, Two Amendments to Agreements Between the County of Ventura and Channel Islands Harbor Properties LLC regarding ERNs for Parcel X-3 and Parcels F and F-1.

In a response to comments  letter to Rene Aiu and Lauraine  Effress Dated June 22, 2020; Mark Sandoval referenced the deliverables due March 31, 2020 from Channel Islands Harbor Properties saying  “It is true that these proposals could have been taken to the Board for five year lease option Agreements, as specified in the ERNs, but that action would have made little sense as it would have been for projects I could not support, as I knew we would end up in the same position as Fisherman’s Wharf in the absence of a visioning process.”

HBCA has always stated that VISIONING is useless while this developer has Exclusive Rights To Negotiate.

This developer has had YEARS to read the Local Coastal Plan, look at the zoning, listen to the public and alter his plans. The developer has chosen not to.

The Harbor Department has chosen to NOT update the Public Works Plan.

The County has chosen to extend exclusive rights to negotiate instead of requiring a REQUEST FOR PROPOSAL (RFP) instead of a Request For Qualifications (RFQ) that specifically requires residential development, while bemoaning the lack of proposals for other than residential!

WHAT YOU CAN DO

TO DO:
Send emails!

Feel free to make your own statements and remember to provide you name and local of residence!

Let them know that NO Developers are going to partake of visioning while a single developer holds Exclusive Right to Negotiate.

Let them know the ERN RE-Vote should have been put on an agenda for a later date an the public should be able to comment!