HBCA needs your support more than ever!

The Harbor & Beach Community Alliance supports the City’s jurisdiction and position with
regard to the matter of the Fisherman’s Wharf project. We know we are not alone in this.

Things heat up in August!

There has been a flurry of back and forth communication between the County of Ventura and the City of Oxnard in August. Below the most recent is at the top.

On August 25 2017 the County of Ventura sent a letter to the City of Oxnard
Subject: Response to Letter Dated August 16, 2017 Regarding Fisherman’s Wharf 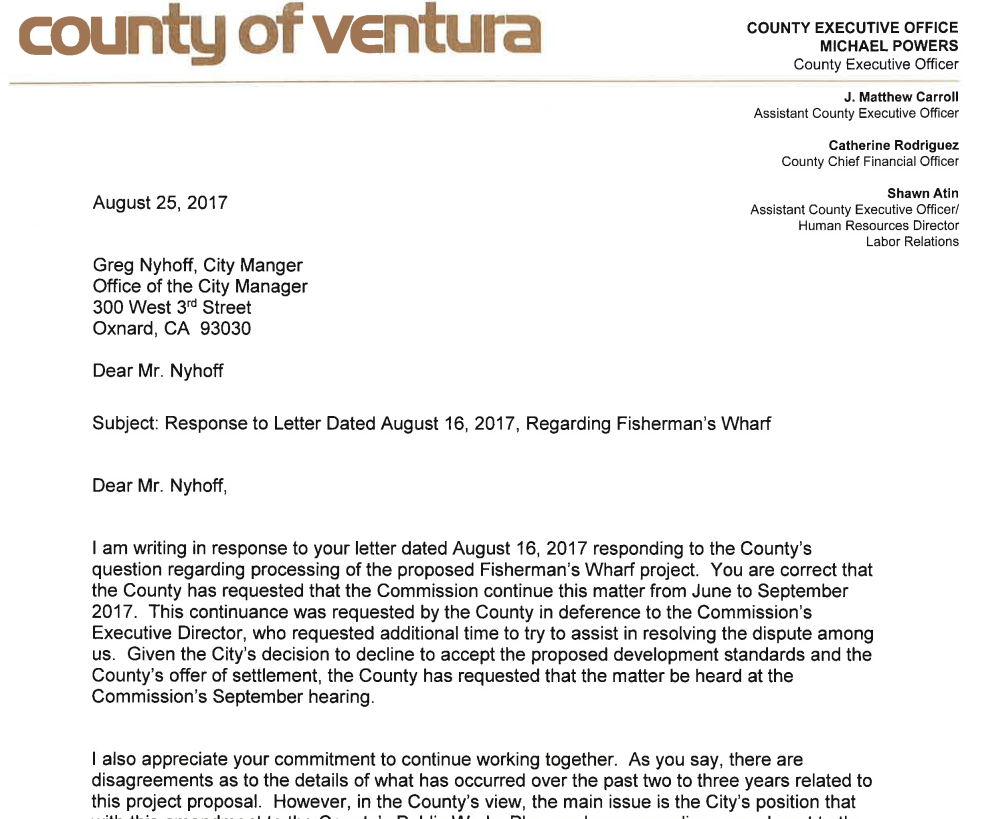 It remains the County’s position that while this may generally be true in a coastal zone where a Local Coastal Plan is the sole document (or first in time), the Coastal Act and accompanying regulations make it clear that the County’s first in time PWP grants sole project approval authority to the Commission, with all subsequent permitting by the County. It is our view that the role of the City in this case is to determine whether or not to process a land use LCP amendment to enable the project to move forward.

On August 16th The City Manager of Oxnard, Greg Nyhoff sent a letter to Michael Powers, CEO of Ventura County regarding letter of August 14th, 2017 Relating to Fisherman’s Wharf Project 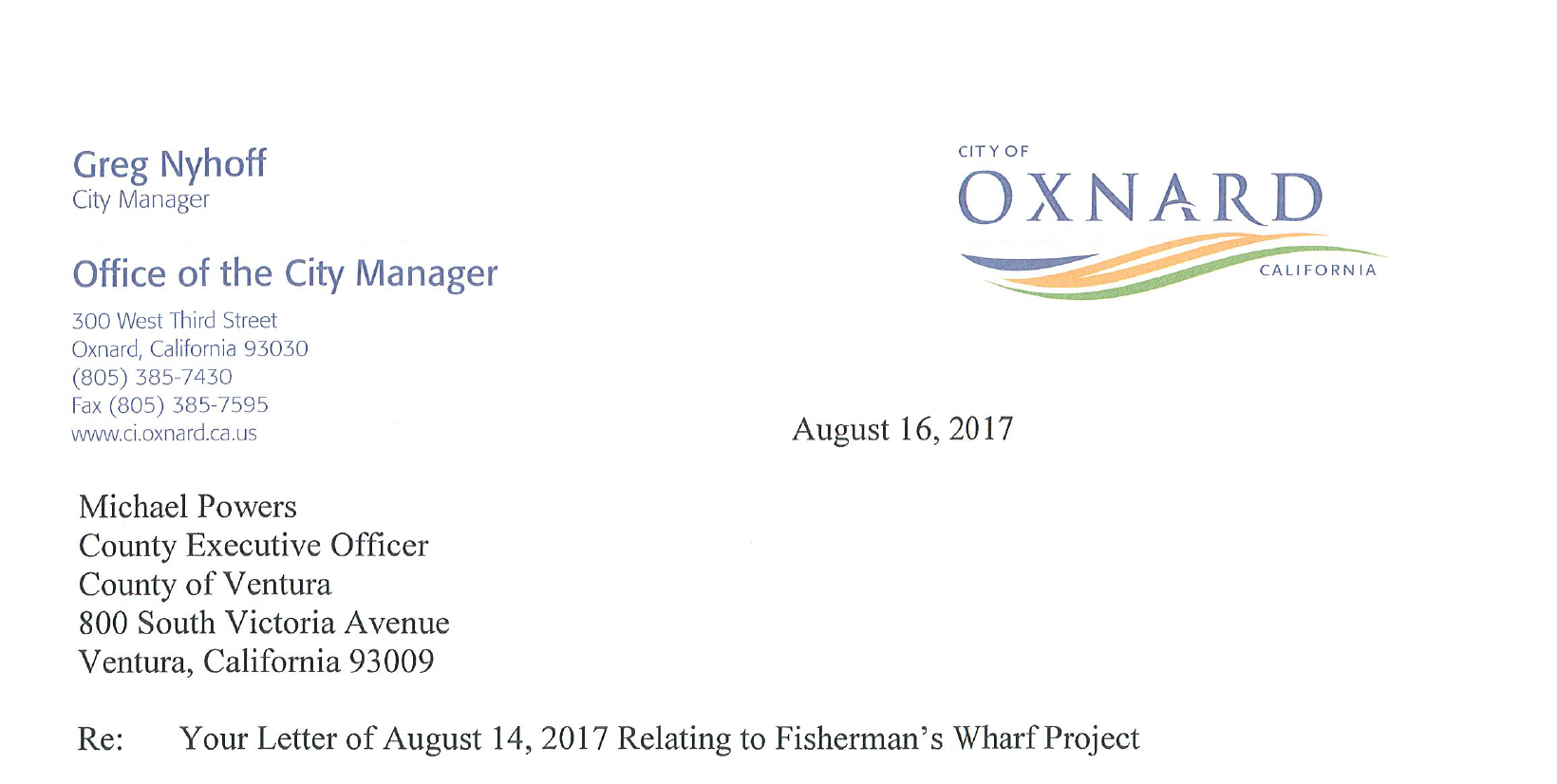 To read the August 16th letter from City Manager of Oxnard, Greg Nyhoff to Michael Powers, CEO of Ventura County regarding letter of August 14th, 2017 Relating to Fisherman’s Wharf Project:

On August 14 2017 the County of Ventura sent a letter to the City of Oxnard re: 7-6-2017_Outline-County Settlement Draft to City of Oxnard 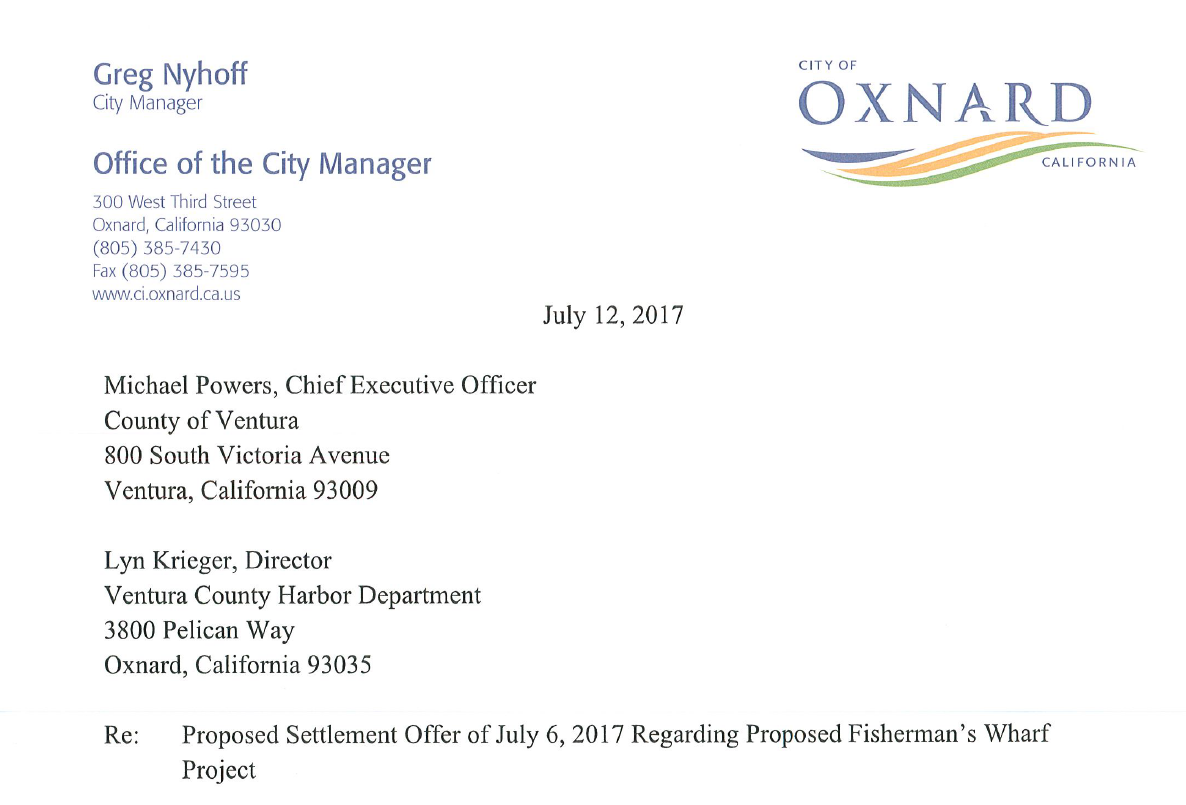 In researching background on the Fisherman’s Wharf proposal, HBCA went back through the Coastal Commission hearings related to the project. We came across the attached letters which point out the problems with how the Harbor Department and the County have operated and continue to operate in developing within the Coastal Zone. There appears to be a disregard for the purpose of having a Public Works Plan (PWP) approved by the Coastal Commission (CCC).

The current PWP was certified over 30 years ago in September of 1986. There has been no update since then but a string of 7 amendments. All these amendments and the attached letters point to the need for a complete update of the current PWP. This continuous series of amendments prevents everyone from seeing the ultimate development plan for the harbor. This is piecemeal planning at its worst.

It obscures the intended next stage of development not only from the public, the City of Oxnard, other public service agencies but from the Coastal Commission as well. It obstructs coordination and planning from other entities (see attached letter from the Channel Islands Beach Community Service District).

Even more recently during the Coastal Commission hearing of July 14, 2016, Commissioner Mary Shallenberger said, “I just want to say again, I really don’t like project driven amendments. We’re left with what we think the project is going to look like…what we think is going to be there.”

What is also of concern is what may not be disclosed to the Coastal Commission during these amendment hearings. Were the Commissioners told during the PWPA 6 hearing for the replacement of the Casa Sirena Hotel with height variance for the parcels F and F-1, that on April 19, 2016, a section of these same parcels had been also awarded to Channel Islands Properties, LLC (the developers for the proposed Fisherman’s Wharf project) through an ERN for a future development proposal? In the Harbor Director’s letter to the Board of Supervisors dated April 19, 2016 “ERN will establish revised timetables for CIHP…These deadlines include dates for CIHP to reach an agreement with Brighton on potential division of the existing parcels.”

The community supported the hotel project and height variance at the March 22, 2016 Ventura County Board of Supervisors meeting without knowledge of the upcoming ERN. The amended reinstatement of the expired ERN for parcel F and F-1 a month later was a surprise and was opposed by the community. This further reinforced public distrust in this type of piecemeal tactic. This same apartment developer also got another expired ERN amended and reinstated for parcel X-3 that is currently designated as visitor-serving and harbor oriented. The developer is not required to make proposals for these parcels until their Fisherman’s Wharf project progresses.

The Harbor Department has said and will likely continue to claim there are no proposed projects for these parcels and no decision has been made regarding these parcels by the Board of Supervisors…so who knows what will happen. This is how the Harbor Director has responded in several of the hearings for previous amendments and NOIDs. (see Coastal Commission hearing on December 9, 2009).

This piecemeal planning tactic using project-driven amendments to get development approved in the Coastal Zone must end. The harbor development plan should be clear and open to the public, the City of Oxnard, and the Coastal Commission so that reasonable and informed decisions can be made that are consistent with the Coastal Act and the public’s interest. What is now needed is an updated Public Works Plan not a PWPA.